*This giveaway is now closed — thank you to everyone who commented! The winner is…. KAREN, who said, “I see many great reviews of this cookbook and I would love to have one, I have just discovered the Paleo diet and this would help alot!” Congrats, Karen — please send an email to: celiacinthecity@gmail.com to claim your prize!

I was lucky enough to receive a copy of Eat Like a Dinosaur a couple of months ago, and am finally getting around to talking more about it.

I’ll start out by just getting to the point — go out and get yourself a copy.

There has been plenty of chatter in the gluten-free world about following the paleo diet. Also referred to as primal or real/whole foods. I was intrigued by it all, so I started following along on some of the blogs and Facebook pages: Balanced Bites, Paleo Parents, (also known as Matt and Stacy, the authors of ELaD)  PaleOMG, Mark’s Daily Apple, to name a few faves.  (Next up in the reviews is Practical Paleo from Diane, over at Balanced Bites.)

Like I said, I was gifted a copy of Eat Like a Dinosaur, from their publishing company several months ago, but because my “dinosaurs” are in Minnesota with their mama, my celiac sista, we had to use Skype to introduce them to the book.

One of the first chapters is actually in storybook form, about a little boy who went from pizza Fridays at school to a very different way of eating (like a dinosaur…and liked it!) – thanks to technology, I was able to read it to them and get them tuned in to the idea of trying some new eating habits.

This summer they came to stay with us for a week, so we dove into the book on the first day, and worked our way through it during their stay. (and their mama was busy trying out some recipes at home too — like this Spaghetti with Meatballs dish, made with spaghetti squash.) 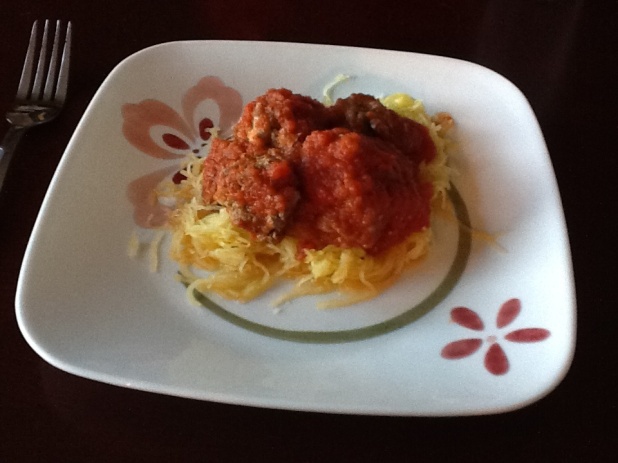 Let me just say, before we get to all the food photos — this book isn’t just for kids. We’re loving it at our house, long after our little buddies are gone. I have no doubt that we’ll be making “Carter’s Cashew Bars” for many years to come. 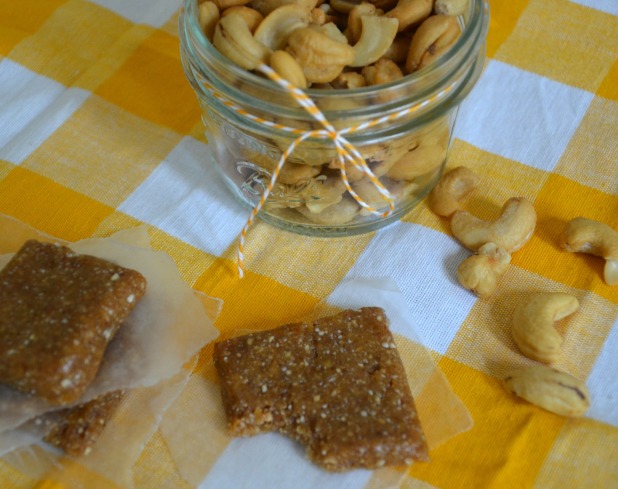 It was such a treat to have them both here in my kitchen, pulled up to our (very limited) counter space, working as a team. (at least for the most part)

Check out my chefs in action…

Those cookies we mentioned making the night before? Take a peek. 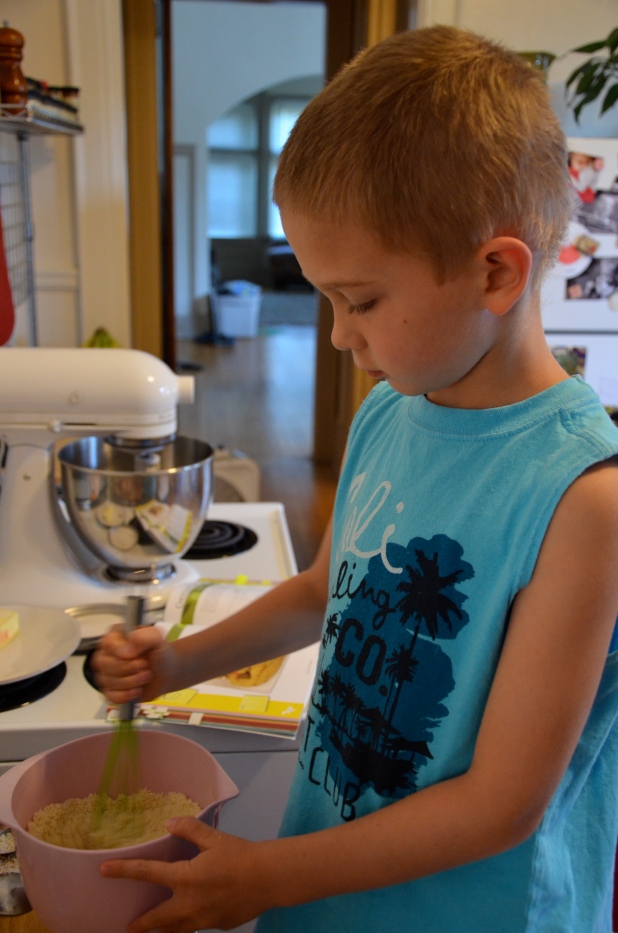 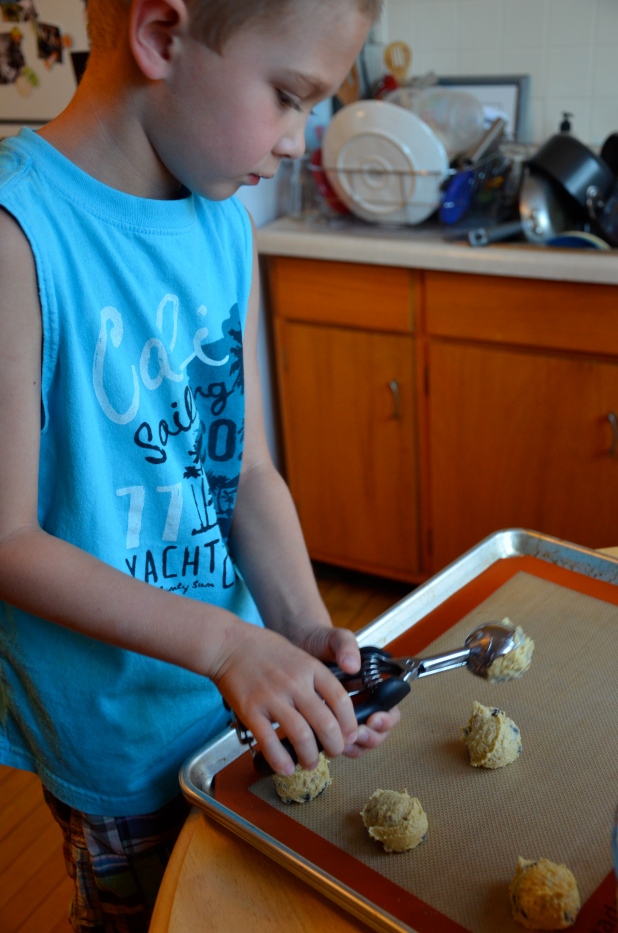 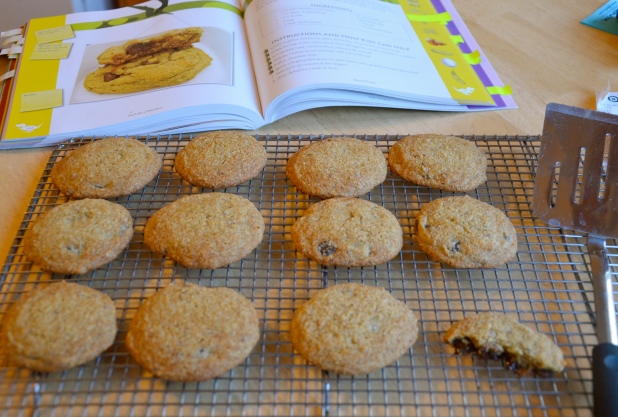 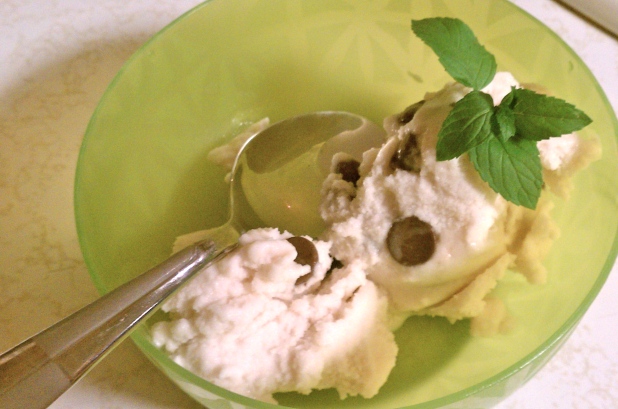 Auntie Sarah was a fan (so was their mama and grandma) but the boys weren’t fans of the ice cream. It was different for sure. Fresh mint flavor, which I loved, but it had a different-than-the-store-bought taste that they weren’t digging. But they did try it, and it was the only thing we made that they didn’t chow down.

What they did dig? These Fool’s Gold pieces. (Chicken Nuggets)

You caught a glimpse of them in the video working on these, and they were so into it — this was all them, my little chefs!

You know what would have gone great with those nuggets? 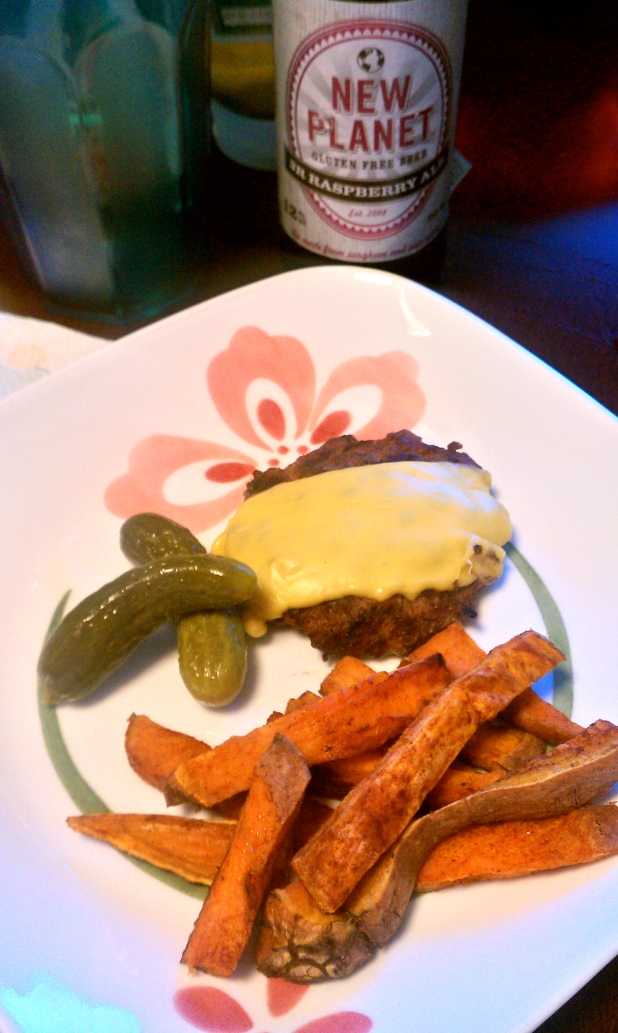 And we didn’t forget about breakfast options — the Eggs In a Nest were a hit, and again, they did the work. 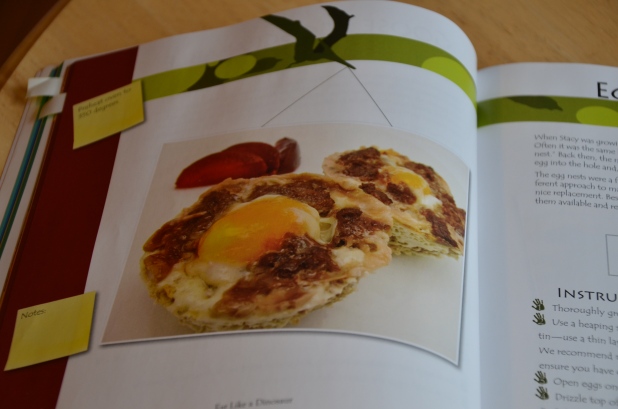 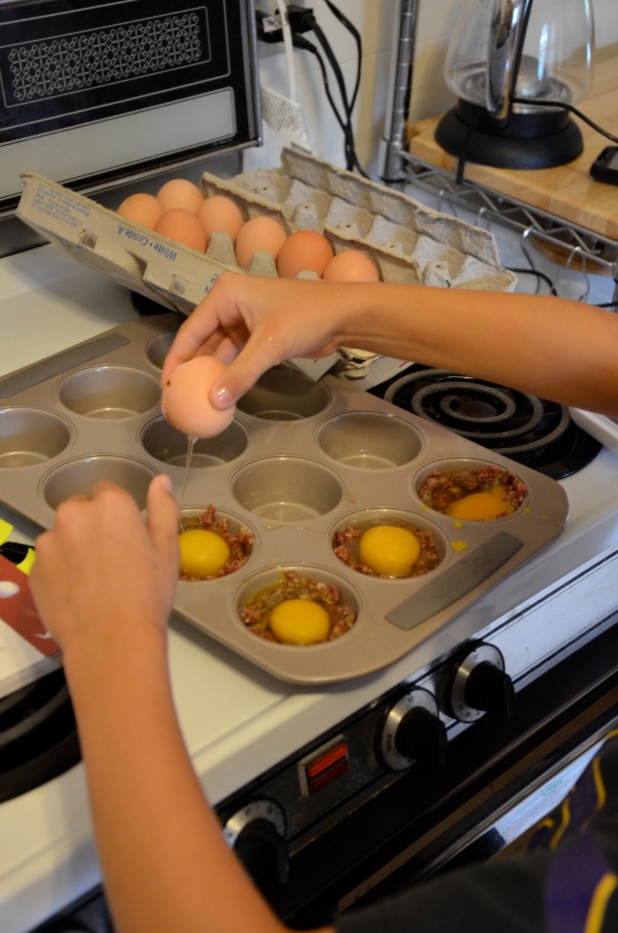 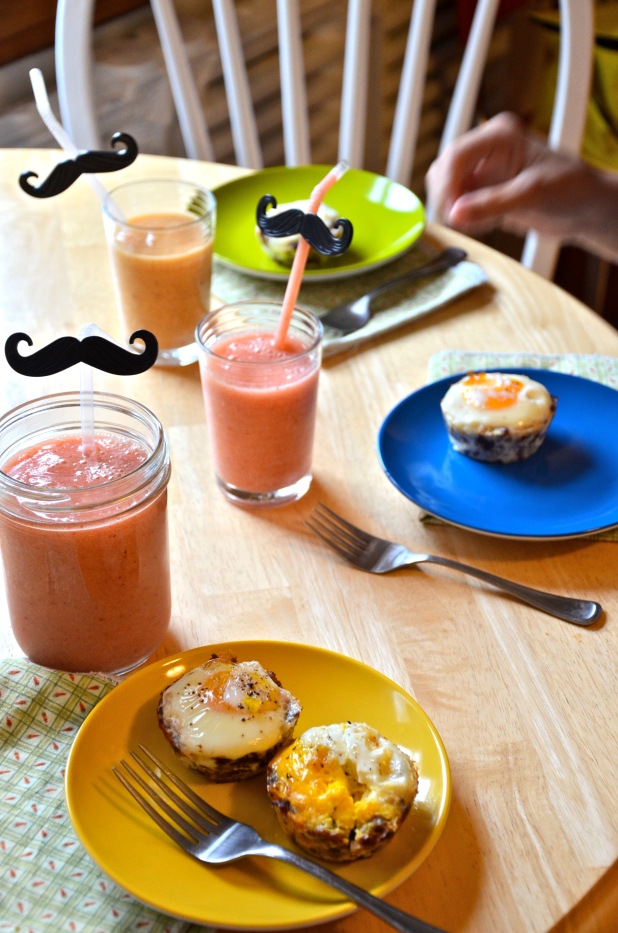 we mustache you a question — do you love smoothies as much as us?

*Note: my little Chef Carter doesn’t do egg yolks. He just doesn’t. But he does like egg whites, so you can modify these to fit your picky eaters and/or other intolerances or dietary needs. 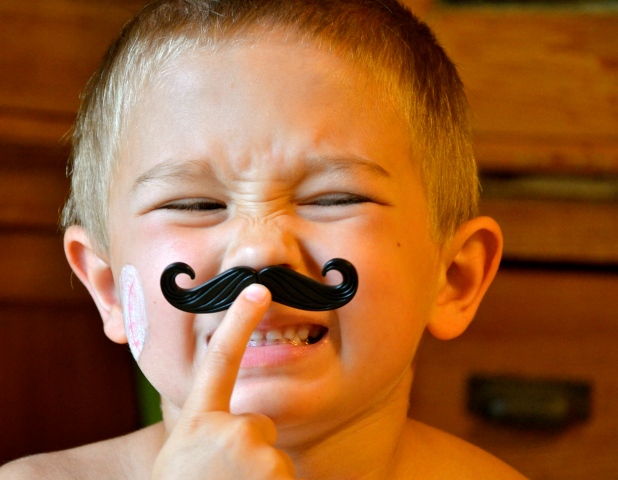 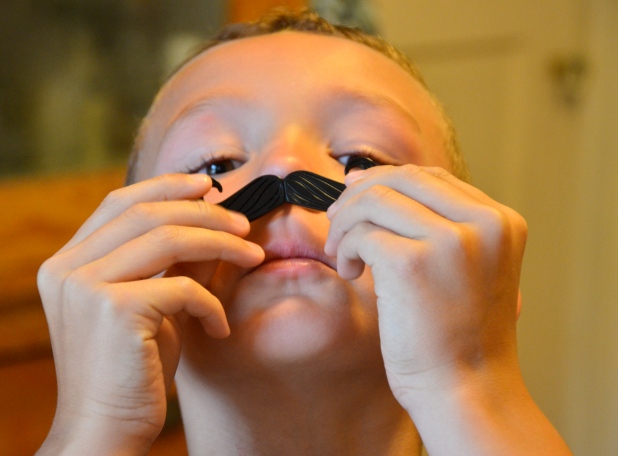 Tayden was in charge of reading us the recipes before we started each recipe, and we gathered up our mise en place. If there were eggs involved, Carter was our guy – he’s a big fan of cracking those shells. (if you’re concerned about shells, just have them crack the eggs in a small bowl, then pour them in after making sure you are shell-free) 🙂

There is so much to love about this book, here is a short list of reasons our family is still raving about it:

In fact, just tonight before finishing up this post, I made a batch of Gigi’s Carrot Cupcakes. You know I’m a sucker for anything mini, so after I made the dozen the recipe called for, I used the little extra for some minis. (I think I had a bit extra because I added the optional walnuts AND raisins.) 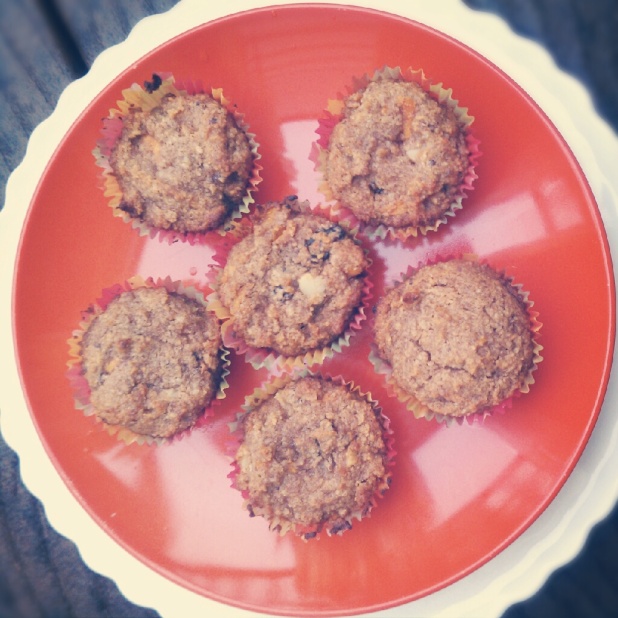 Oh.so.good. The flavor is just perfect. Tastes like fall — and feels like it, it was 62 degrees on my rainy walk home from work! I’m still getting used to using coconut oil, but one thing I’ve noticed is that the liners were really greasy when I took them out. I’ve noticed this with other coconut oil things too… for all you experts out there, is that normally how it goes? I cooled them on paper towel to soak it up, but just curious.

Like I said — just go get the book, order it here. OR leave a comment below telling me if you have tried any paleo recipes, what worked for you, what would you miss most, (cheese for this girl) or just say hello and I’ll enter you into a drawing to WIN A COPY OF THEIR BOOK!

*drawing will take place on Wednesday, September 19th at 8pm cst — for us residents only*

*Although this book was a gift from a publishing company, that does not in any way affect my opinions or reviews – as I’ve told you before, this blog is real life and I will keep it that way with you. I will be honest about my reviews (whether positive or negative) regardless of the product being a gift, or something I purchased on my own. I am extremely grateful for the perks I receive from companies from time to time, but will not allow that to influence my reviews.

50 thoughts on “Eat Like a Dinosaur : A never-had-so-much-fun-in-the-kitchen book review (and giveaway)”